The 11th hour of the 11th day of the 11th month of the 11th year….. Strange to think that the last time this happened, a century ago, it had no meaning beyond the odd coincidence of numbers. 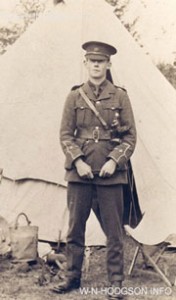 In 1914 too it was just another day. Noel Hodgson had been in the army all of two months and was in camp at Bisley, training on Pirbright Common. The Battalion was up to strength in officers – many of them, like him, straight from university or school. New drafts of men were still coming in. There must have been an enterprising photographer making his way round the camp too, taking postcard photographs for the shiny new soldiers to send home. Noel sent his mother one at the end of October. It shows him standing in front of his tent, looking rather self-conscious in a smart new cap and tunic, rank displayed on the cuff, as per regulation, sword hilt held at an awkward angle, so it can be seen. But with all this he wears his ordinary civilian trousers and his message is a wry comment about being improperly dressed.