When I heard that today was National Poetry Day I thought, ‘you’re writing about a poet – you have to find an update for that.’  But which poem to choose? ‘Before Action’, still among the most loved of the poems of the First World War?  ‘England to her Sons’, which the last of the war poets, Geoffrey Dearmer, considered an achievement beyond the skill of the other war poets; ‘It is better than Kipling,‘ he told me, ‘but Kipling wasn’t there.’

No, not that.  I’m plumping instead (lovely word, ‘plumping’) for what I think is one of Hodgson’s most remarkable poems; one which casts a huge question mark over all the things we think we know about the mindset of Britain on the outbreak of war. The moment has been pictured so often as Philip Larkin pictured it in his beautiful MCMXIV. The ‘August Bank Holiday lark‘, when a generation rushed to war grinning and tossing their caps in the air, expecting to be home by Christmas.

In the weeks leading up to the war, Noel Hodgson was climbing in Scotland. By the end of July, as he headed south for Cumbria and the fells he would already have known that war was inevitable. He paused somewhere on the journey to work through his feelings about what was to come, but you would have to look hard to find traces of patriotic excitement in the resulting poem. With the impeccable timing which characterised a lot of his work, ‘Roma Fuit’ [Rome is no more] was published two days after the declaration of war: 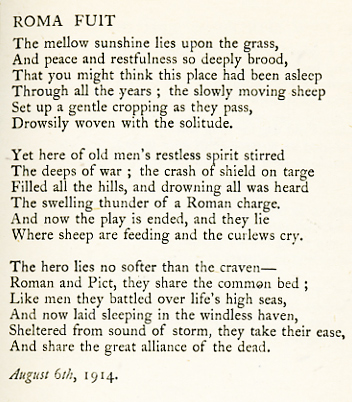