Some were able to snatch a few hours’ sleep, but darkness also allowed a freedom of movement impossible in daylight. Wounded and alone, Captain Nation had hidden in a dugout during the German counter-attack. Once it was over and the attackers withdrawn, he emerged and struggled back to Gun Trench. He could go no further and was in a bad state, so two of his company volunteered to take him back to British lines. They had 200 yards of open ground to cross, still at risk of machine gun and shell fire, but they succeeded, using a trench ladder as a stretcher.

From the adjutant’s party north of the Vermelles-Hulluch road, Lieutenant Pridham set out on a similar journey with a small detachment of men in search of ammunition, bombs and much-needed food. The others waited. In the early hours the officers patrolled the trench to check on their men. Noel Hodgson found six men from his company killed by a single shell while they slept. About 100 men survived the night in that part of the line, with him, Captain Brindley and 2nd Lieutenant Rayner. To the south of the road, 2nd Lieutenant Smyth had perhaps another 90 men.  It must have been a huge relief to them all when, at first light, their own reserves arrived led by Captain Martin, second-in-command of A Company.  He took over command of what remained of the battalion.

For the rest of the day the Devons stayed where they were. During the morning Captain Martin was able to establish a reliable line of communication between the two groups. At mid-day a runner brought news of an impending attack on Cité St Elie, but despite a heavy bombardment which lasted all afternoon, no attack came. As darkness fell, another runner warned the Devons to expect relief from the 2nd Royal Scots Fusiliers. Hours passed and nothing happened. It was after midnight when the relief at last arrived and the depleted battalion was able to move back by companies to the British front line. By 3 am they had taken up the positions which they would hold for the next three days, moving forward to dig trenches or stand to arms when ordered. Finally, at 2.30 am on 30 September, they began the march back to rest billets.

They were still marching at dawn, when the clean air, the rustling trees, and the early bird song, seemed much sharper and more vivid than ever before. Noel Hodgson found a poem forming in his mind – as he often did on the march. When the body is fully occupied the mind can roam free, and that morning his mind was processing his first experience of battle: both the horror of it, and the fierce pride he felt in his companions and all they had achieved. 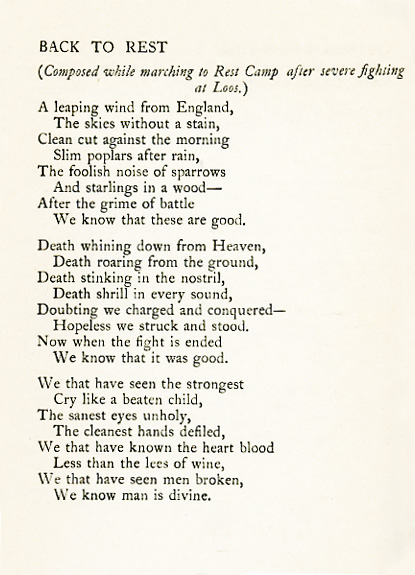