The first two weeks of September were a strenuous time for the battalion. The 9th Devons were out of the line and were often kept on the move in daytime. When they stopped, their nights were taken up with working parties at the front, digging new trenches, building parapets and filling sandbags, often in pouring rain. In late August British High Command had finally agreed to the full-scale offensive the French demanded and the whole area was buzzing with preparations. Noel Hodgson told his sister that often he was so exhausted that he fell asleep walking along, and he depended on Jones, his servant, who always managed to find straw for him to collapse on at the end of the march and hot water for shaving when he woke.

But he was writing. Nowell Oxland’s death had crystallized a change that was already becoming apparent in Hodgson as he saw the war at first hand. He was looking to prose as well as poetry to pass on the experience and his writing was taking on a new sense of urgency, born of the unspoken knowledge that like his friend, he might not have long to live. He told his sister that he was going to send her some articles on life in the company mess, which he hoped she might be able to sell. He seemed hesitant, unsure whether the time was really right for this, yet still determined to try.

The two ‘Company Mess’ articles were not published, though almost all of his subsequent trench prose was, and was very well received. Perhaps these first articles contained too little war for the home market. In the first, six young officers – including Hodgson himself, thinly disguised as ‘Smiler’, the Grenade Officer  –  return to the mess in the evening to open their post, talk over the events of the day and grumble about brigade orders. In the second, the company has just come out of the trenches and four of them snatch a few hours out in the countryside, collapsing on the grass and remembering the summer before the war, and what they might have might have been doing if there had been no call to arms.

Folded with the second article there was also part of a poem, a work in progress with the words ‘to be continued – WNH’ scrawled down one side. In the complete version which Noel’s father later included in ‘Verse and Prose’ the four verses encapsulate the emotions of the first six weeks in France; his longing for Cumbria and the fells; his memories of Durham and school; the physical strain of his new existence in France and his grief for Oxland and his other friends. 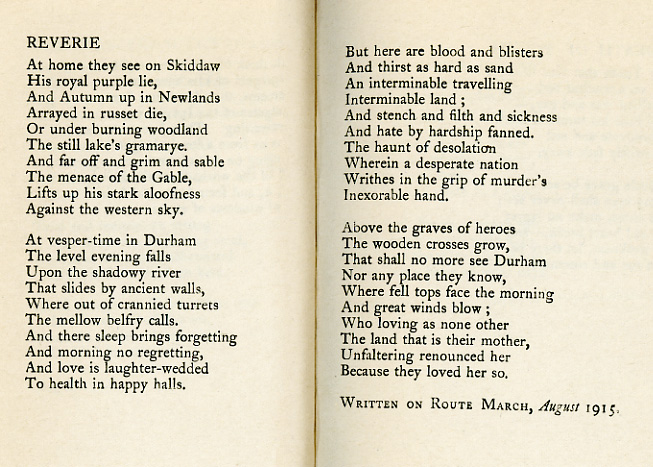