On Thursday, 29 June 1916, readers of Cecil Chesterton’s weekly paper New Witness were the first ever to see the poem ‘Before Action’ by Edward Melbourne. It was to become one of the most loved and remembered poems of its time.  Edward Melbourne was a regular contributor to the paper but apart from Chesterton himself and the Hodgson family only a handful of people knew who he really was. Since the summer of 1914, Noel Hodgson had used the pen-name on all the manuscripts he sent to the New Witness. Increasingly, as the war progressed, he used ‘Edward Melbourne’s writing as an outlet to describe his experiences and express his feelings, often in ways his letters did not, and for his family these poems and sketches must have been an important line of contact with him. But they also had resonance for any parent, sibling, or friend anxious for someone in the firing line. And none more so than ‘Before Action’, his prayer for courage in the face of death.

The poem struck a chord because it was real. There were so many people then – tens of thousands more families in that summer alone – who longed to reach out to a son or brother, lover or husband, and know how he had felt before the end. ‘Before Action’ was not especially comforting. It offered no promise of heaven or of any form of afterlife. In it he took the conventions of lyric poetry, the sunrises and sunsets and beauties of nature, the lovely cadences of language that he handled so well, with all his memories and hopes for the future, and he set them down in front of the enemy machine guns that he knew would be waiting. What he said, very simply, was ‘I’m not a soldier, I’m too young for this, but I will go through with it,’ and in 1916 that resolve was what people wanted and needed to hear.

The coincidence of the poem and Hodgson’s death, first revealed in print by Cecil Chesterton on 13 July 1916, increased ‘Before Action’s poignancy and power. Soon a legend grew up around it. This was started accidentally by Noel’s father later that summer, when he added dates to some of the poems and prose sketches in the book he produced of his son’s work. They were dates of publication but he never explained this; readers assumed they were dates of writing. As the story was handed on down the years, so the idea of Noel Hodgson writing ‘Before Action’ two days before his death took firm hold.

The next question has no definite answer. If not 29 June 1916, then when? When was ‘Before Action’ really written? It might have been at any time, but the New Witness pieces follow the order of Hodgson’s documented experiences precisely and the evidence of both Cecil Chesterton and Bishop Hodgson confirms that this poem was the last. A weekly paper allows for a very fast turn-over of material; even so some days must have elapsed between the poem being posted in France and arriving in England. My best guess – and it can only be a guess – is that it was written during the last nine days the battalion spent in trenches before the battle; nine quiet days when they had time on their hands, Martin’s model and its revelations in mind, and the deadly hillside stretched out before them. If Hodgson had posted it on their return to Grovetown it could easily have reached Chesterton in time for publication on the 29th: knowing what he knew, Noel might even have requested publication that day: that we will never know. But with the publication of ‘Before Action’ another piece of the familiar story falls quietly into place. 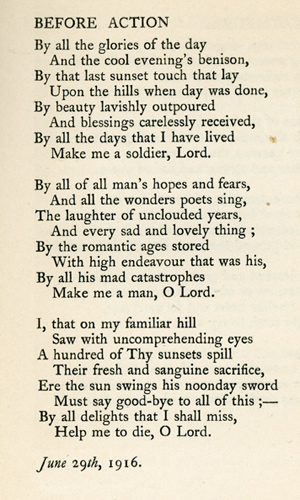